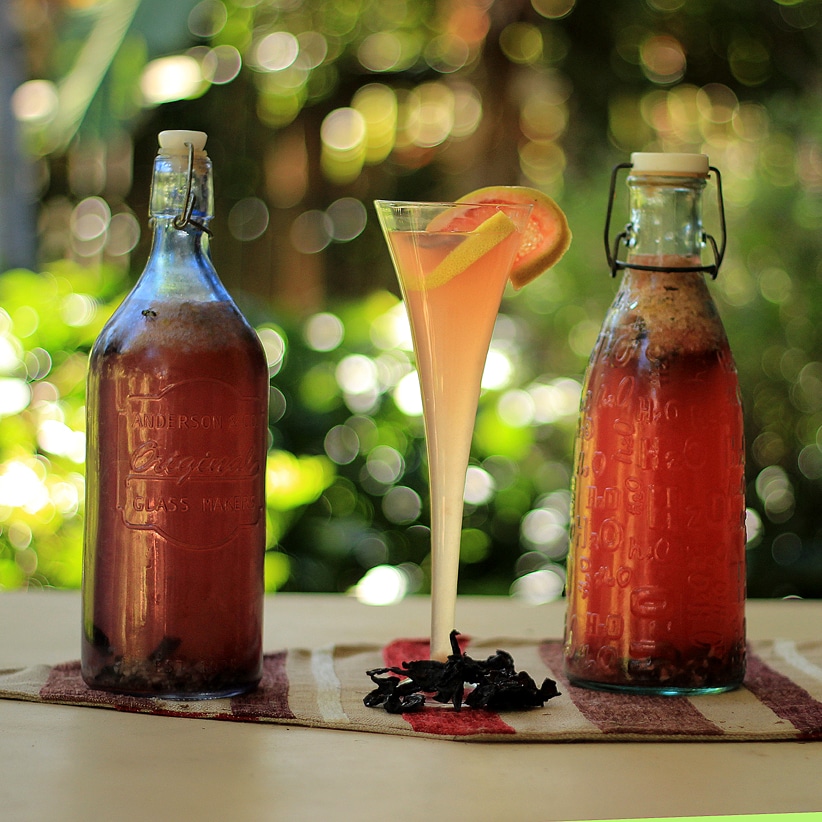 There are many recipes for ginger beer; the basic ingredients are ginger, lemon and sugar.

Real ginger beer is made from fresh root ginger (Zingiber officinale), often with other flavorings such as juniper (Juniperus communis), liquorice (Glycyrrhiza glabra) or chili (Capsicum annuum) – giving the product extra ‘bite’. Yarrow (Achillea millefolium) is sometimes used to inhibit bacterial growth (as it was in normal beer before the introduction of hops).

The process is easy, but there are a few key steps. First, you must use organic ginger for both the ginger bug and the ginger beer: conventional ginger is irradiated and might not ferment. Second, when you boil the ginger mixture for the beer, let it cool to body temperature before adding the bug. Any hotter, and the living beasties will die, and your beer will fail. In about a week you will have a tangy, spicy, extra-gingery beer that is just as tasty on its own as it is stirred into your favorite summertime cocktails.

Mix grated ginger — naturally rich in yeast and lactic acid bacteria — with water and sugar, creating a starter or bug, like in a sourdough or kombucha starter. As the fungus and the bacteria feed on the sugar, they ferment and produce carbon dioxide — the bubbles for your drink. Combine with sweetened ginger water, leave out for a few days to re-ferment, then bottle it up.

The ginger bug is simply water, sugar, and grated ginger, which starts actively fermenting within a couple of days.

This easy starter can be used as yeast in any beverage fermentation e.g. Sweet potato fly

Combine 1 teaspoon grated ginger (unpeeled), 1 teaspoon organic sugar, and 1 cup clean filtered water in a small bowl. Stir, cover with cheesecloth, and leave in a room-temperature area (70°F to 75°F works best). Add another teaspoon of ginger and sugar every other day until the bug becomes active (it should take 6 to 8 days). The bug is active once there are a few bubbles on the surface.

For the ginger beer:

Add 1 litre of clean water to a large pot and add grated ginger to taste. It is a good idea to start with less and work your way up.
Cover pot bring to a boil and drop to a simmer. Simmer for 15 minutes, add another litre of water to cool mixture down.
Place a fine-meshed strainer over a medium-sized food-safe container or bucket and strain ginger water. Discard ginger.
Add sugar and lemon juice to ginger water and stir to combine. Touch the ginger water with your finger: if it is body temperature, proceed. If not, allow ginger water to cool.

If using raw honey, add the additional water first, and add the honey when the temperature is below 30° C.

Once ginger water has cooled to body temperature, place the fine-meshed strainer over the ginger water and add the ginger bug (and lemon if using), straining liquid through. Stir vigorously.
Cover container with a tea towel let sit at room temperature, stirring occasionally, until visibly bubbly, anywhere from a few hours to several days.

Stir often until the brew is bubbling away when you are not stirring it. When this occurs, bottle straight away for non-alcoholic ginger beer, or leave to ferment longer for more carbonation.

Place a funnel in a bottle and pour ginger beer through. Cap tightly and leave at room temperature until carbonated, anywhere from 1-3 days.

Once carbonated, refrigerate ginger beer and drink within two weeks.

Bottles should only be left out the fridge for a few days, as excessive carbonation can lead to explosions. Drink quickly; fermentation is only slowed by refrigeration, not stopped. Also try half and half ginger/turmeric for a good, sharp tasting tonic, even add horseradish if you are adventurous.

Ginger beer will happily work straight up, or as a mixer in all sorts of cocktails and mocktails. Classic drinks keep it simple with just ginger beer, booze, and one or two extra flavors to round out the adaptable recipe for a spicy buzz. It pairs well with gin and rum for the boozy lovers.

Suggestions from our dear friend Gina

Gina says there are the Storms + the Mules + Others

Chop and boil 2 liters of knotweed into a strong tea for at least 10 minutes in approx. 4 liters water. Add 1 1/2 cups sugar. Cool to body temperature (or room temperature). Strain plants and add a cup of ginger starter. Mix and cover with cloth, leaving on the counter for a couple days. Once it becomes fizzy and less sweet, bottle and refrigerate. Corks are best to cap bottles with – the carbonation builds even in the fridge and it is better for the cork to fly out than for the bottle to explode.

Replenish your ginger bug: add another cup of water, 2 tsp ginger and 2 tsp sugar, stir and refrigerate until ready to use again.

Sassafras is a sub-alpine rainforest timber. The bark and leaves taste of pepper, allspice and cloves.

Add hops, ginger and bark to water, boil one hour.
When Luke-warm strain through muslin bag and put in cask or fermenter, while still slightly warm stir in ginger bug.
Let stand at room temperature for three days, skim each day.
Strain into bottles and seal. Check in three weeks.

Share this along with a friend! Have a friend who needs this? Send them here

Thanks for sharing!
You make good things happen.

Learn more about my online courses